~ Prescription of Cancer in the 21st Century:
From Trapped to Inspired ~

I am an observer of this world. I always observe beings in this world, in people, and in nature. I can find there are various laws in that observation. However, most people put priority on their desires or interests, they cannot notice the laws. Therefore, the world that human beings created ignores the laws, as a result, contradictions have generated on the earth. Now, the contradictions have reached the peak of human society. In a way, that describes the high capability of human beings. However, that high capability is not always expressed in a good direction because that high capability can be used to bring about extremely negative matters, such as wars.

In this state, we, human beings live a very unhealthy life every day. One of those unhealthy phenomena is the invasion of chronic diseases. Currently, cancer is the top resultant of death in Japan. So, I thought about the feelings of those cancer cells. They have such a high capability and excellence in a way. They know the suitable ranges for their habitat and once the environment is set, they expand their power exponentially. They spread their power by parasitically surviving off of other living creatures.  From this statement, can you imagine the current state of human beings who are living on this container called the Earth?

Cancer cells make a suitable area and go into that frame. When someone gets trapped in their thoughts, it is described as 囚in the Chinese character. This shows person (人) is trapped in a frame (□). When the bottom part of this frame is removed, an entrance is created and information is coming from outside, and when the top part is removed (門), a law of the universe will come in. When it happens, Trapped (囚) becomes Inspired (閃). When one is trapped, thoughts go around in one’s brain, and the person lives only with thoughts based on own values.

In contrast, the trapped state is called “horizontal” thoughts.  When the horizontal thought follow the vertical thought, it functions soundly, and when this vertical energy (|) and the horizontal energy (－) meet, they become oneness (十) and it is the same structure as the earth. Our body, the solar system, the galaxies, and the universe are also the same structure. The cross of Christianity is also the same. In Katakamuna (ancient Cosmo-physics which emerged about 13,000 years ago), is read as the path from (－) Hi (means 1 one) to (十) To (means 10 ten), and together it is read as (十) Hito (means human) which describes well-established enlightened human beings.

Cancer cells create their own world when they find a suitable area for them to live. However, even the environment is pre-established for the cancer cell in order to increase its population in someone’s stomach, generally, the cancer cell does not spread around, because there is an immunizing power to suppress the cancer cell in the human body. There, the cancer cell follows the laws of their inhabitant area, when the gate opens they take a role 閃 (inspired), and they function as normal cells.

However, when we try to understand the Chinese character for cancer (癌), it describes when one carries goods (品) up a mountain (山), one will be sick (病), and this letter indicates greedy human characteristics. Cancer cells have a high capability and expand their area more and more. For example, if they go into the stomach, rather than focusing on their own role in the stomach, they change the cells which have various roles in the stomach into cancer cells. They end up creating a cancer dominated world, and the function of the areas where the cancer has increased begin to break down. Ultimately, the important functions stop working in the body, and the whole life function will be terminated. As a result, those cancer cells die together. The cancer cells are naturally co-existing with other cells when the host body is healthy; however, if they ignore and spend their capability only in order to expand their world, they end up killing themselves.

If the human beings do not change the current attitude, the universe and the earth’s ecosystem will give us realization for our problems through various phenomena that reflect such attitudes. This is the message to “Connect with others and harmonize”. Moreover, this message tells us, “You are meant to be born for this world and this world gives birth to you.”

In the early days, people did not get cancer so much; however, more and more people get cancer currently. According to the recent statistics, one in three Japanese people die with cancer, and one in two people get some sort of cancer in one’s life. From there we can see that the attitude of the current society reflects those who put priority on themselves and do not care of others, are attached to money and goods because people do not feel connected with each other, and therefore they feel an uneasiness to their lives. The current people think happiness is about having a lot of money and goods, and misunderstand thinking that achieving is one’s success. However, that is the opposite attitude from the superior being’s which human beings naturally should be. The cancer cells tell us, “Your attitude for living is exactly like being cancer cells.” Once your heart opens and becomes harmonious, the cancer cells end their role and naturally vanish.

Since entering into the 21st century, human beings face many more difficulties in many ways. However, that is not a problem in this world. Your very small attachment to your daily life becomes big, links and forms this whole world’s reality. At the same time, our individual problems and worries that are shown in this society are also contributing toward this reality. Therefore, when we release ourselves from our small trapped situations in order to solve those problems, then that becomes the key for our resolution. Each of us has the key in our hand.

No one would like to be like a cancer cell. Naturally, we were born for this world, so our real purpose as Hito十 (human beings) is to contribute to this world, end one’s life with pride, and that is the ideal human life. Please take a look at yourself and think about how human beings are supposed to live. 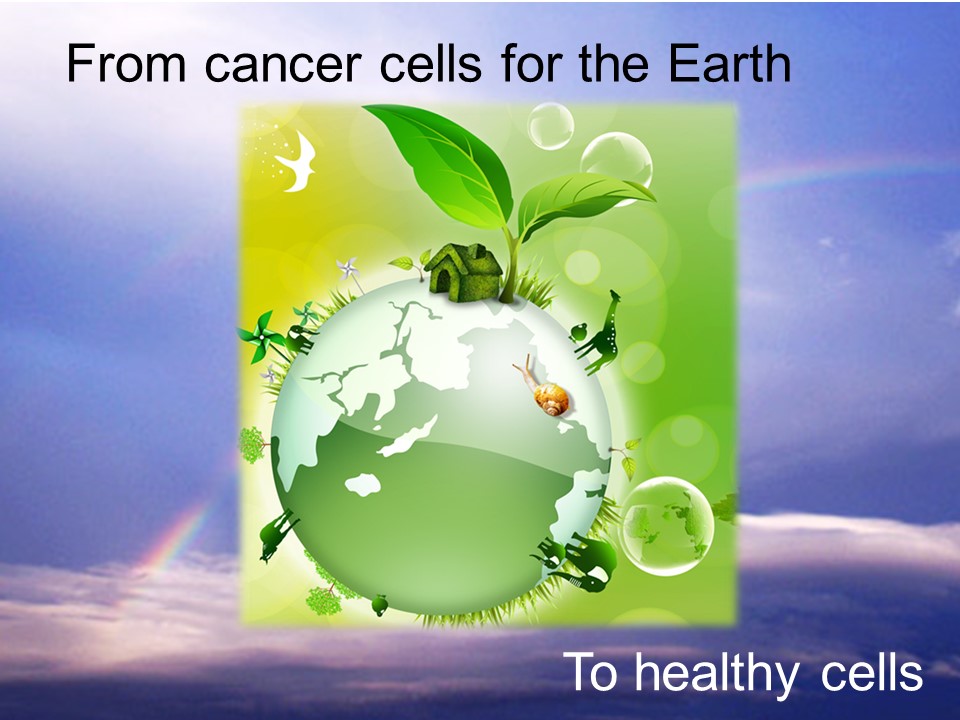