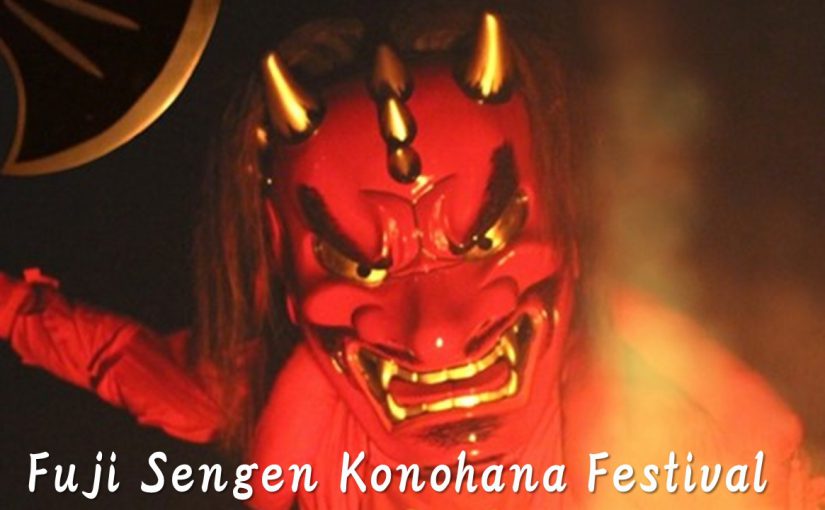 Around the last day of Winter, at the darkest and coldest time of year, the roots of plants begin to move in the soil, and they start to prepare for sprouting as they move toward Spring. The “Flower Festival” has been celebrated deep in the mountains for a long time so that the minds of people who live on earth also blossom beautifully, and so that we do not forget the creator of our souls.

Predicting that a world of unity between the divine and humanity will bloom at the site of Mt. Fuji some day… 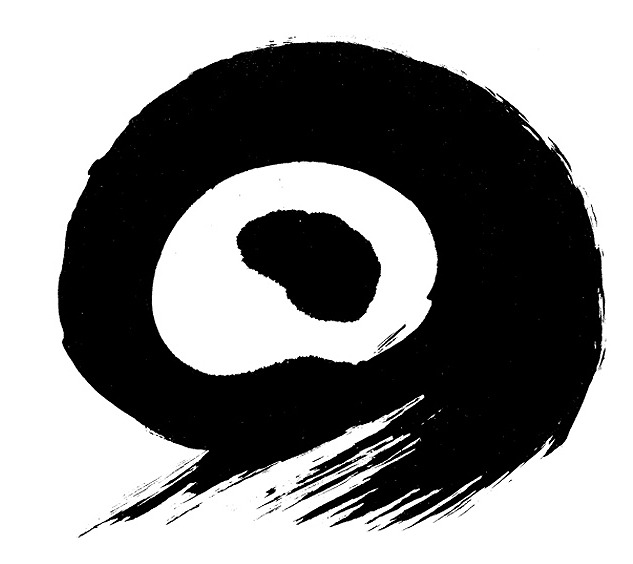 What is the Fuji Sengen Konohana Festival?

The Fuji Sengen Konohana Festival originates from the “Flower Festival,” a “national important intangible folk cultural property” which has been taking place for 700 years at Toei Town, which is a mountain village in the Okumikawa area in Aichi Prefecture.

A long time ago, mountain ascetics who came from the Kumano area to Okumikawa clearly showed villagers that “human beings can be reborn and regenerate themselves with a new personality through ascetic practices” by songs and dances which were popular in the capital at that time. It is said that this is the beginning of the Flower Festival. Since then, the Flower Festival has been celebrated continuously, changing its form, as a festival of “rebirth and purification” because people purify their pollution and receive new life energy by dancing all night and interacting with gods.

Many deities appear in the Flower Festival. There is a scene in which the old man who is the representative of human beings has a dialogue with the Sakaki (a divine species of tree) Deity, who is the deity leader. In it, there is a phrase, “Yaiyai. Ise-Tensyo-Kotaijin (Ise shrine), Kumano-Gongen (Kumano shrine), and Fuji-Sengen (Fuji shrine),” which suggests that this festival will be moved to the site of Mt. Fuji some day. The Tamaki shrine (the inner sanctuary of Kumano-Gongen, which worships the God of the Earth called Kuninotokotachino-Omikami), the Ise shrine (which worships the God of the Sun called Amaterasu-Omikami), and the Tsuki shrine of Toei Town (which worships the Goddess of the Moon and Water called Seoritsuhimeno-Mikoto, the wife of Amaterasu-Omikami), are all located on the ley line which extends from the direction of the southwest to the northeast. Moreover, in succession, these sites indicate the earth, the sun and the moon, and Mt. Fuji is located on the same extension. Mt. Fuji is called “the mountain of divine wisdom,” and it is a place where divine wisdom comes down to the earth. In 2013, the festival which had been performed as an important tradition in a mountain village of the Okumikawa area came to the site of Mt. Fuji as predicted, after a period of 700 years. In this way, the “Fuji Sengen Konohana Festival” was born, and everyone can dance happily and joyfully together, celebrating the opening of a new era. 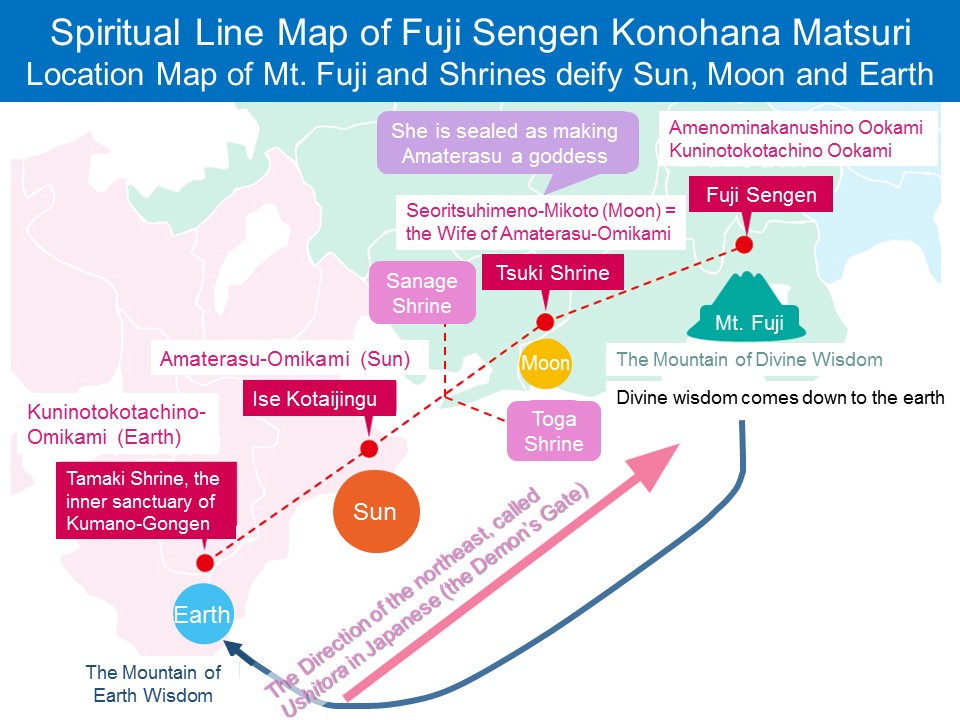 The Direction of the northeast, called Ushitora in Japanese (the Deity’s Gate)

When it is the darkest and coldest time of year, people repeatedly dance with gods, awaken the power of life which is sleeping in the soil, purify their pollution, receive new life energy, and celebrate the first day of Spring. A new life which is reborn in this way is called a “Flower.”

At the Fuji Sengen Konohana Festival, now that the era has reached a great turning point, people will become aware of the truth of this world in keeping with the revival of the God of the Earth, who had been Furthermore, each one of us blooms as an original beautiful flower, and both the dancers and the audience continue to dance in complete harmony as the life force moves them. Hoping that this world will be filled with colorful “individual flowers” some day… 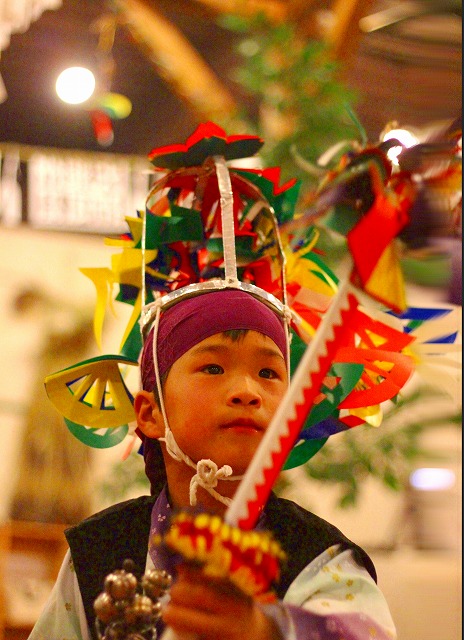 (The Flower Dance with Swords)

The Revival of the God of the Earth

Long ago, the Great God of the Earth  preached the rules of the mind severely to multitudinous gods so that they would not disturb the world with their freewheeling actions. This is the God of the Earth called Kuninotokotachino-Omikami. However, the multitudinous gods who hate polishing their minds could not stand the Great God of the Earth any longer. Therefore, they sealed him away in the direction of the northeast called Ushitora in Japanese. Since then, this direction has been feared as the deity’s gate, and the earth has been in wild disorder because the rules of the mind are gone. However, no matter how unaware human beings may have been of the existence of the Great God, he had been watching the earth even after he was sealed away. During that period, he had appeared annually at the darkest time of the year, as the figure of a deity who told people the importance of facing the darkness of their own minds and moving toward the light. However, those who avoid facing their own darkness have feared the demons and thought of them as the actual cause of disasters.

Now that human beings have acted as they like and the world has reached a dead end in every way, the time has come when the sealing away of the Great God has been broken at the site of Mt. Fuji, which served area. The Great God has come back to the earth as the Golden God of Ushitora, who shines and glitters in gold. Thus, the re-establishment of a totally reversed world has begun. A long time ago, the Great God had a dialogue with the old man as the representative of humanity on earth, and surrendered a Sakaki tree (a symbol of the authority over the earth) to . However, the Sakaki tree with its roots has now been returned to the Great God again through another dialogue between the Golden God and humanity. This is a proof that human beings will surrender the authority over the earth to the divine from the bottom of their hearts, and establish a new world under the unity of the divine and the earth, and of gods and human beings.

The powerful demon which divides mountains and releases the pent-up energy which has been sealed in the soil. He treads down the earth and forms the land. 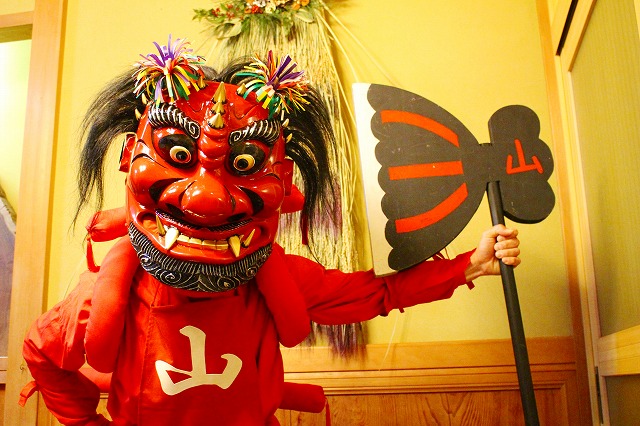 The Sakaki (a divine species of tree) Deity

The God of the Earth which had been sealed away in the direction of the northeast  a long time ago. He brings down the divine principle to the earth where the Mountain Deity has treaded it down, and puts the spirit in it. 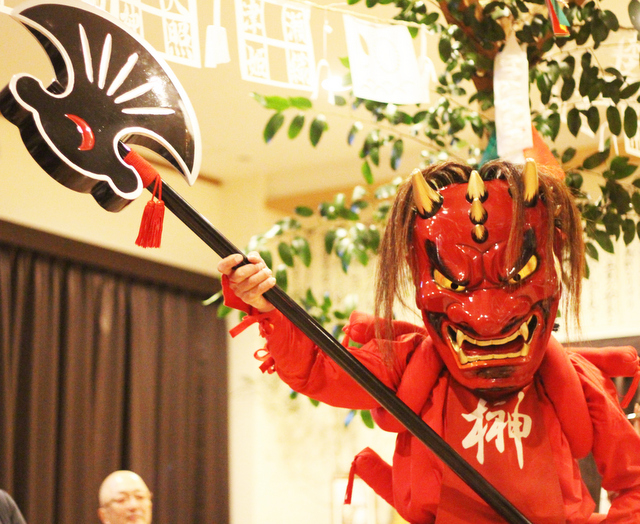 The Golden God of Ushitora (the northeast)

The true figure of the God of the Earth whose seal has been broken. He will re-establish the world which has been reversed, and open the world of unity between the divine and the earth.

Melding the World’s Waters into One

There is a pot over a furnace in the center of the dance site of the festival, and the sacred water will be poured into it from shrines, temples, rivers, waterfalls and so on from all over the world, as well as Japan. The water will be integrated into one and heated with fire. The fire indicates the spiritual property (yin), which comes down vertically as a pillar. The water indicates the physical property (yang), which rotates horizontally around the spiritual property. The world is created by the integration of yin (fire) and yang (water). In Japanese, “fire” is pronounced as KA, and “water” is pronounced as MI, and KAMI together means “God.” Therefore, the world is created by God, who is the integration of fire and water.

People’s minds also will melt into one as they continue to dance around the pot all day. Then, the hot water from the pot will be splashed over the entire site during “the dance with hot water” which is performed at the last phase of the festival. People receive the hot water for purification and become reborn as new beings. The water which is left in the pot will be delivered to the like-minded people around the world who sent us the sacred water, and it will be returned from regional rivers to the earth again. In this manner, the vibrancy of harmony which has melted into one will spread to the whole earth. 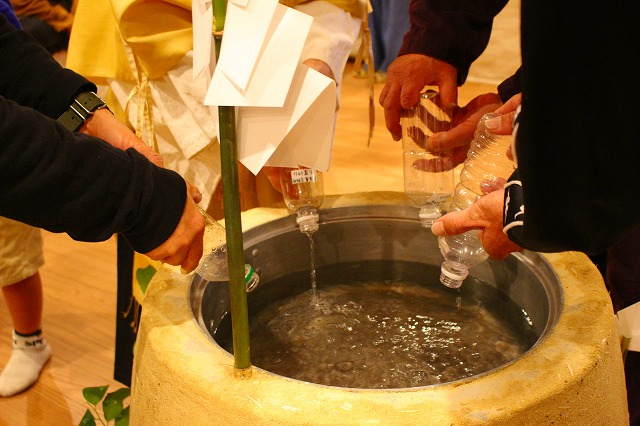 This dance is performed by four young men. After they continue to dance around the pot for over an hour, they join each other in splashing the hot water from the pot. 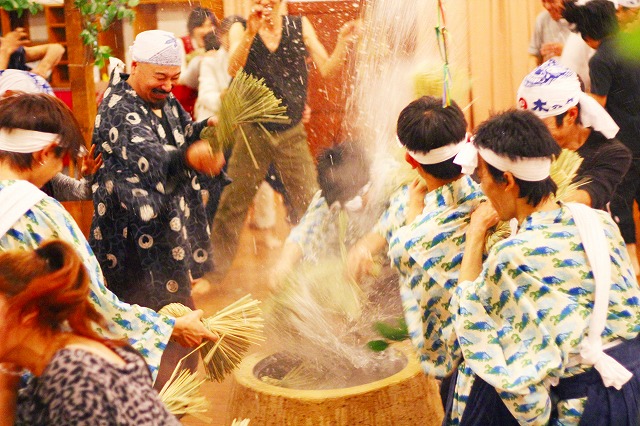 The Flow of the Festival

The Ritual to Invite the Gods

The festival site and the equipment for the festival will be purified, and gods will be summoned from the directions of the southwest, the northeast and so on, and the site will be set. 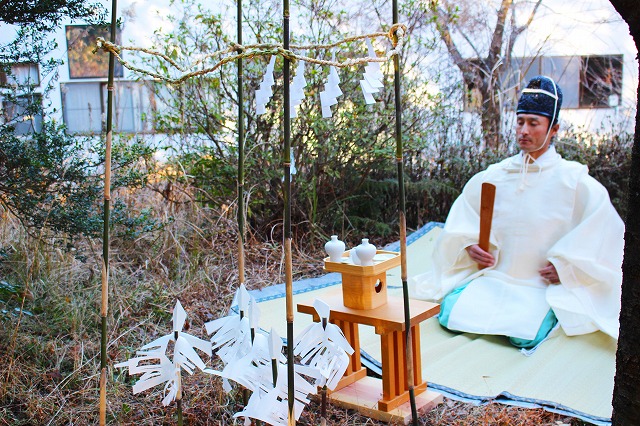 The Water Ceremony (Melding of the Waters)

The world’s sacred waters will be integrated to become one in the pot. These ceremonies will be held on the day before the festival. 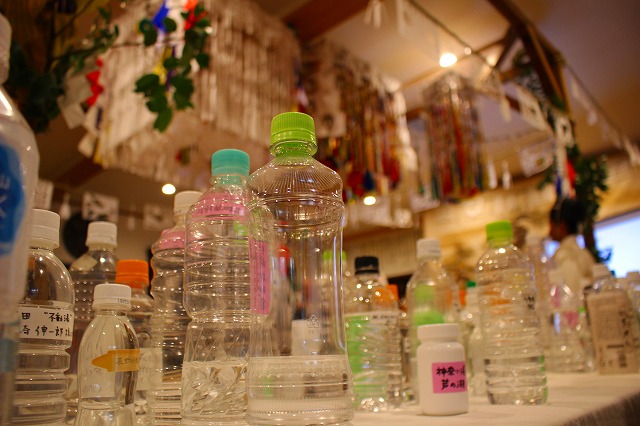 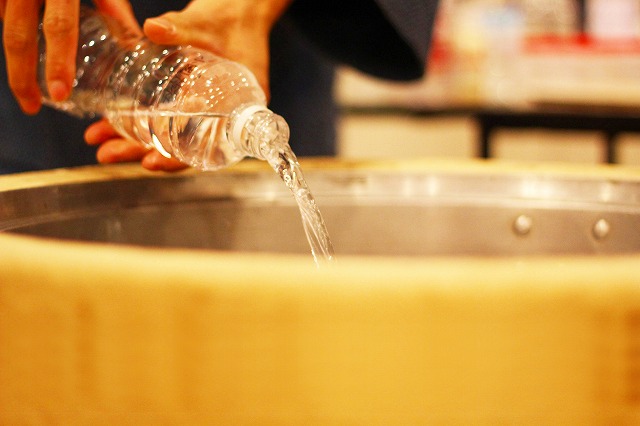 Various dancers and demons appear one after another from morning to night, and dance with the audience. 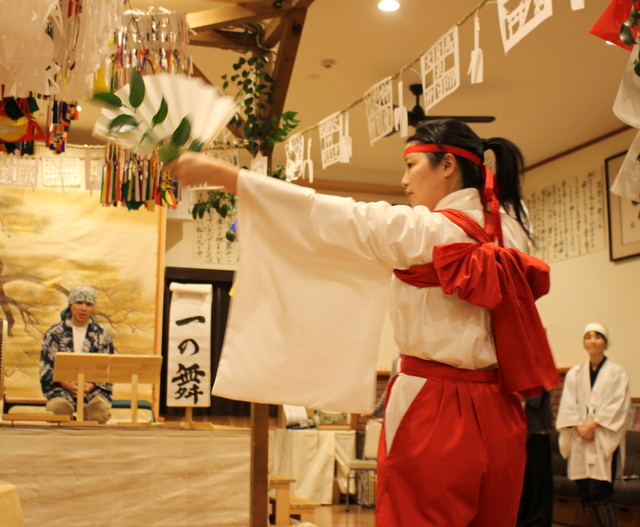 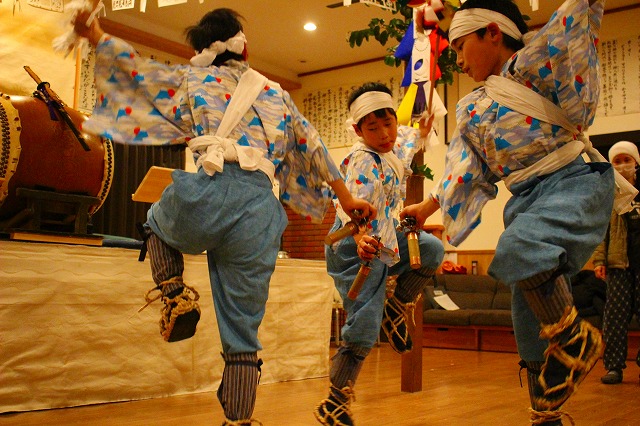 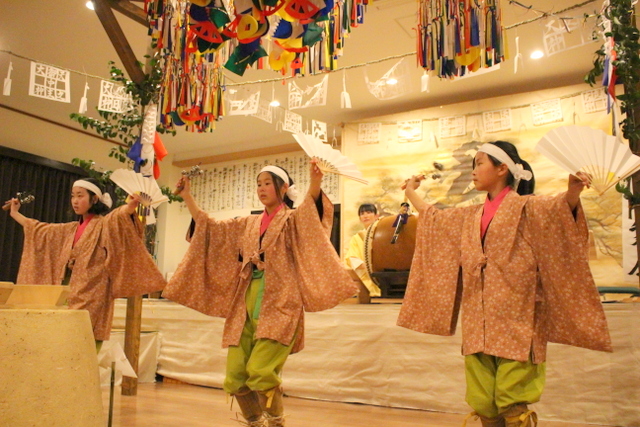 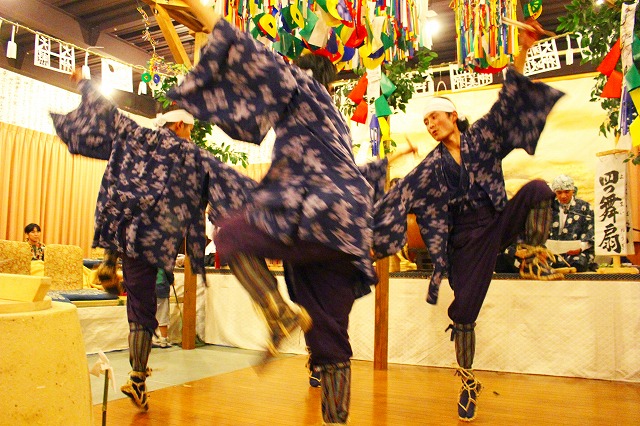 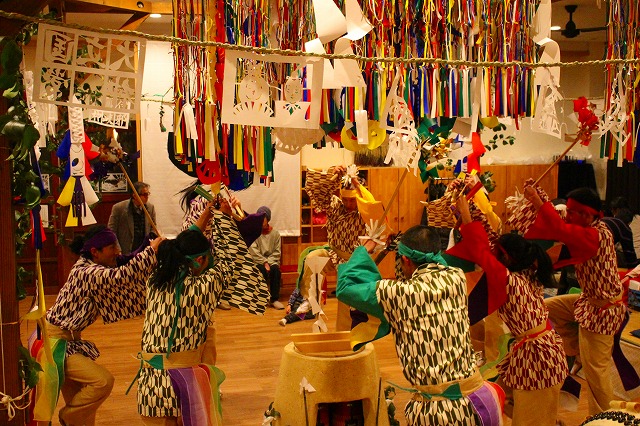 All materials, such as the festival equipment, will be burned with fire and returned to the divine. 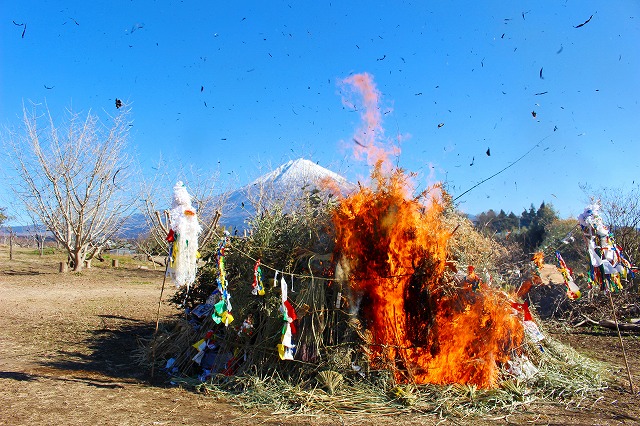 The Water Ceremony (Returning of the Water)

The water which is left in the pot will be poured into a local river and returned to the earth so that the vibrancy of harmony will spread to the whole earth.

With a new mind which has been reborn and purified in this manner, “The Ceremony of the Beginning of Spring” will be held on the first day of Spring, which marks the beginning of the farming season. 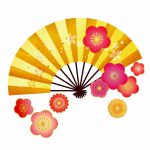 The festival is the site of a splendid interaction between gods and human beings. The audience who surrounds the dance site is called “Seito Syu” in the festival, and they are a force which becomes a main character of the festival, along with the dancers. Please join the dances, everyone!

Traditional calls offered in accordance with the dances, such as “Tehotohe Tohohe” “Tohohe Tehohe” will greatly support the festival. Let’s join each other in calling out together. 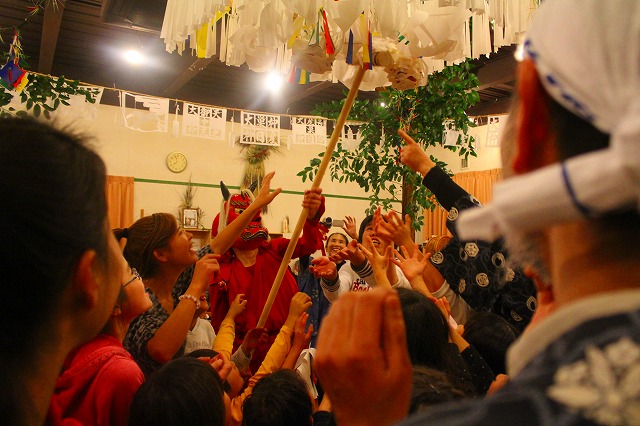 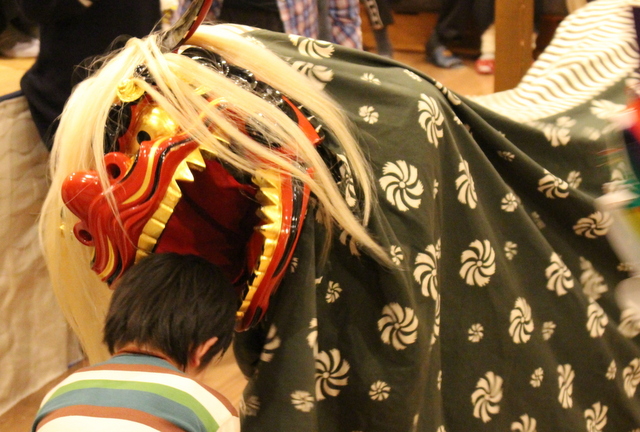 There are some parts in which a special festival song with a 5-7-5-7-7 syllable structure will be sung during the dances; this song is posted on the wall of the dance site. First, a singer sitting in the divine area will sing the first part, so please try to sing the second part after that.

Meanings of this song

The mountain where spirits which connect the divine and the earth gather,
let’s dance together at the foot of Mt. Fuji. 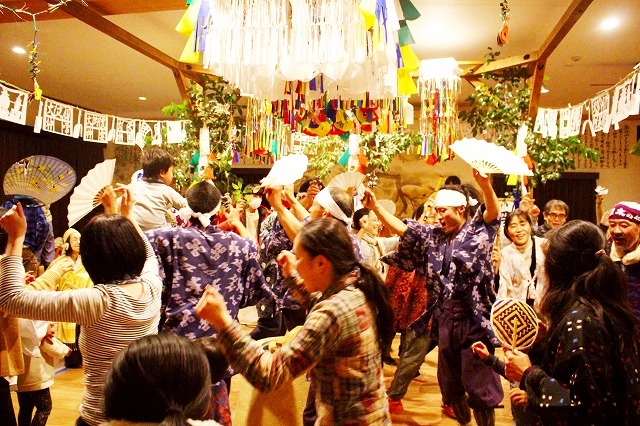 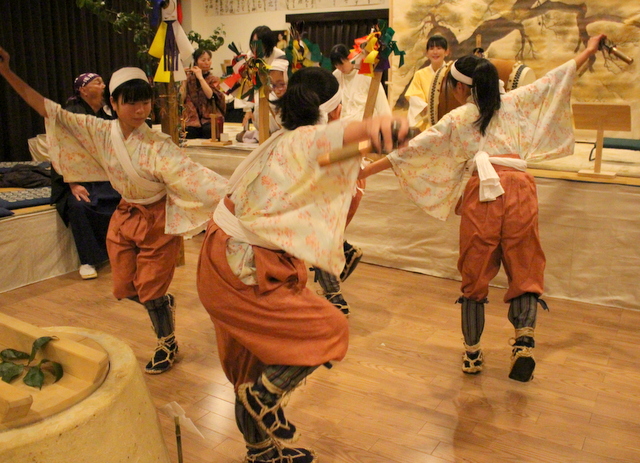 (The dance performed by four girls with swords) 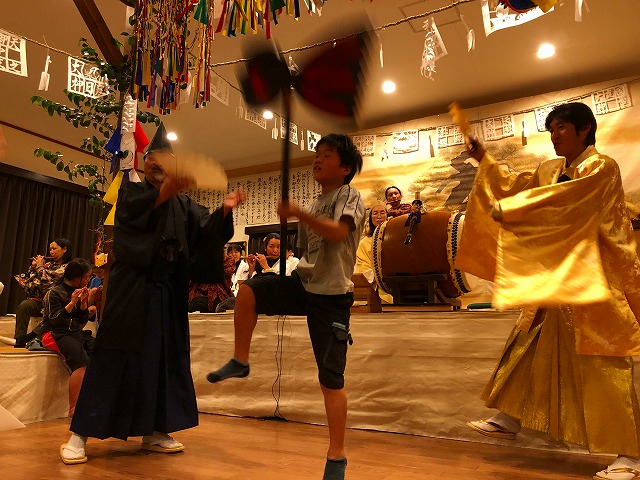 (You can also join the Deity Dance)

The dances proceed based on the sounds of the drum. Please support the dances with a special festival song and calls without clapping your hands.

Please send your donation for the festival. 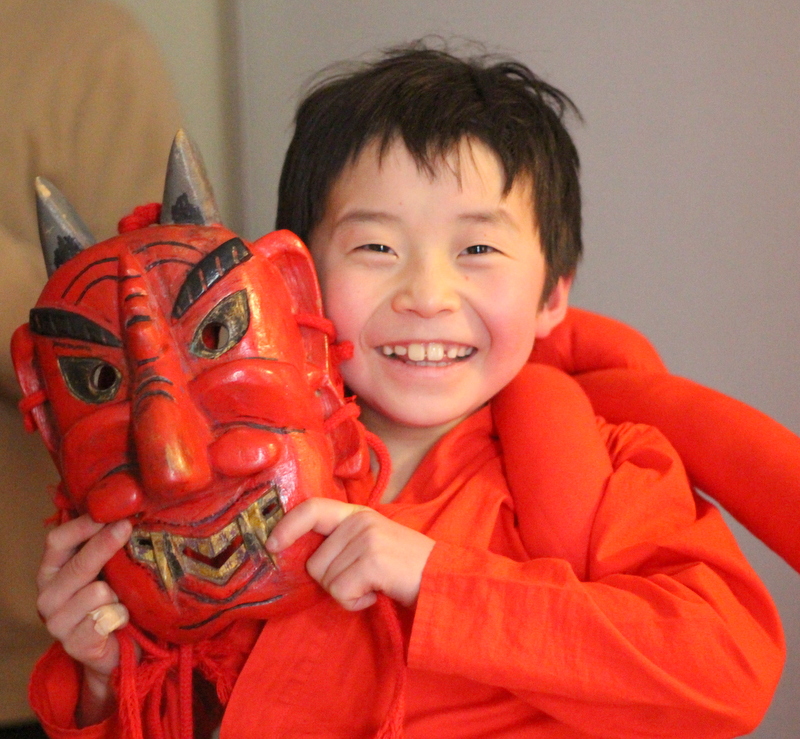 The Konohana Family and NPO Green Grass have taken over this traditional festival at the site of Mt. Fuji, and will develop it as the festival designed to transmit the vibrancy of harmony to the world from now on. Your donation will be used with great care for holding the festival, maintaining the equipment, building a specialized festival site with an earthen floor (as a future project), and others. We are looking forward to your support.

We also accept sacred water
from your region throughout the year.

Here is the postal address: 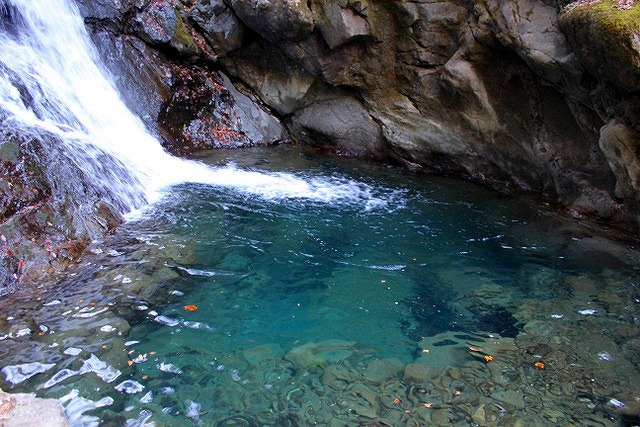