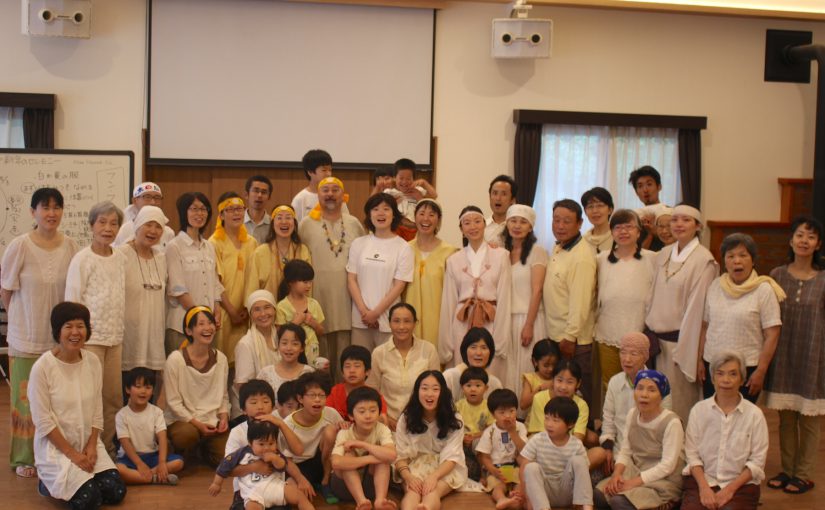 July 26th is the Mayan new year’s day. The Konohana family has held ceremonies every July 26th since the first ceremony in 2014 with the Venerable grandmother Nah Kin and others from the solar Mayan tradition.

This year, we chanted the 5th, 6th, and 63rd Katakamuna songs, as well as Amautsushimichi.

On this day, it had been raining heavily since the morning, and Jiiji gave a speech at the end of the ceremony.

Today is July 26th, 2020. I feel that it is very meaningful to celebrate this day with a ceremony for the Mayan New Year. We first met the Mayan people in 2014. They visited the foot of Mt. Fuji to pray for world peace and held a ceremony with us.

The earth that we live upon exists in the universe. How many people are there currently living on the earth who recognize that they exist in the universe? Actually, most people are trapped in their egos and just live according to their karma. Therefore, human activities are disturbing the earth’s ecosystem, that is to say, they are disturbing the great harmony of the universe, and it has been, even today, raining so much all over Japan. This year’s heavy rainfall which is rarely seen in recorded history shows the result of human activities. Moreover, infectious diseases like the Coronavirus are widespread all over the world. We human beings have been acting with an intent to be happy and build a better society, however, we must acknowledge the fact that we have received the current situation on earth as a result of how we have treated nature. This message comes from the universe.

Civilization is supposed to develop the natural resources of the world and bring about a rich and happy society. However, such an advancement to become rich and happy has actually formed the age of darkness. Now, we have reached the peak of darkness after 25,800 years, and we are facing a time to realize what we have created for ourselves. Accordingly, we human beings must acknowledge that the values that we have been living by were based in the age of darkness. Now, we have just passed the winter solstice of the galaxy and are living through the great turning point, which is compelling us to shift our consciousness from darkness into light. We need to change our perception and acknowledge that what we once considered right is no longer so. This requires that we embody the consciousness of enlightenment in order to truly go towards the peak of light.
Seven years have passed since we reached the peak of darkness on December 21st, 2012. In numerology, the number 7 means a “qualitative transformation”. Now, we are in 2020 which is the 8th year after 2012, and the era is surely qualitatively transforming. By looking at what is behind the darkness and waking up to the truth, what we do will bring light to this world and restore the earth to its original state according to its proper circulation. That is the most important thing entrusted to human beings, especially those who recognize this turning point, and the time has come that we are called to awaken to this momentous occasion.

This Mayan ceremony awakens us with the precious cosmic spirit inherent in each human beings. The light of the spirit comes from the Central Sun, the center of the galaxy, and it is always illuminating us. The seeds of light are already rooted in ourselves, beings of the cosmos. Let’s awaken the seeds, which will sprout as our collective enlightenment.
The current era no longer supports the pursuit of each individual’s selfish desire. Now, each one of us are called to establish a pillar of light within ourselves and respond to the call of the Central Sun, which is the center of the galaxy. Those pillars will become a bundle of light to surround the world, and now is the time for each one of us to awaken to that consciousness.
This means that we have reached the end of an era in which people are trapped by their egos, which obscures their true spirits with desire. Each one of us can be a catalyst to awaken to a high and precious consciousness.

It is the 27th year since we started to live at the foot of Mt. Fuji, and we’ve reached a time for qualitative transformation. We are living in an era which is increasing with natural disasters as a result of how we have lived in the past, therefore it is very important that we resonate with the Mayan people and share in the importance of the Mayan ritual on this day at the foot of Mt. Fuji, the most sacred place of a country that is the first to watch the sun rise on the earth. Each one of us should be aware of this, and cooperate with each other and harmonize just like the earth-life ecosystem while being independent in order to create a truly beautiful world. Today, we have begun this new directive through proclamation during this ceremony at the foot of Mt. Fuji. We are aware of our role, and uniting here at this moment means that we are taking responsibility for that.
With the awareness at this ceremony, we have started a wave that will wrap the earth, which will allow us to overcome many of the upcoming difficulties – and while they may be painful, we are hopeful. With this awareness, I hope that we will find the will to live and regenerate the earth into a planet that is harmonious with the laws of the universe.

Today, at this place, I hereby declare that a regeneration of the earth has begun. I greatly appreciate Venerable grandmother Na Kin and the Mayan people who suggested this ceremony to celebrate the Mayan new year. So everyone, let’s walk together towards the future with an awareness that each one of us is a galactic being in the universe!