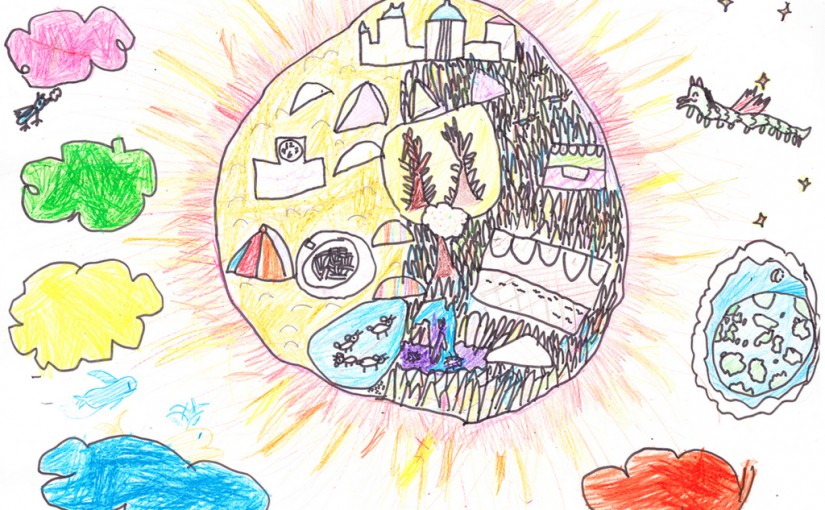 Himi-chan is a 7-year-old girl who was born and grown up at Konohana Family. During the summer holiday, she researched on clouds in the sky because she wanted to know about shapes and movement of cloud.

One day, when she was walking with Hitomi who was assisting her research by taking photos, and talked about the following story.

If Everyone’s Mind in the World Becomes ONE

There is such a thing as a country
It is countries that make wars
So, even if one country becomes peaceful
The world cannot be peaceful

There is also such a thing as the world
If everyone makes ONE PEACE
The world can be peaceful!

The rainbow candy has 500% of invisible and shiny light

In the place of the sun
Everyone can use magic

In the place of the sun
All the plants, insects, animals and birds can talk

Everyone understands each other’s mind rather than talks

There are also big rainbow locusts
Which are very gentle

So, there is no war

In the place of the sun
There is neither the death penalty nor prisons
There are no policemen, either

However, the king of the sun sometimes becomes angry

So, he told me to go to the Earth,
Find my friends
And settle the wars a little bit

Then, I was born on Earth

When I asked the king of the sun to drop me into the sea of the Earth
He gently guided me toward the Earth
And then I came down to the Konohana Family in Japan!!

There is a man called Isadon in the Konohana Family

Then I imagined
“What kind of shape one life would be?”
“If everyone’s mind in the world is put together
What will happen?”

If everyone’s mind in the world becomes ONE
The world will become peaceful
And right away there will be no war!

*Isadon: One of the founding members and
a spiritual leader of Konohana Family