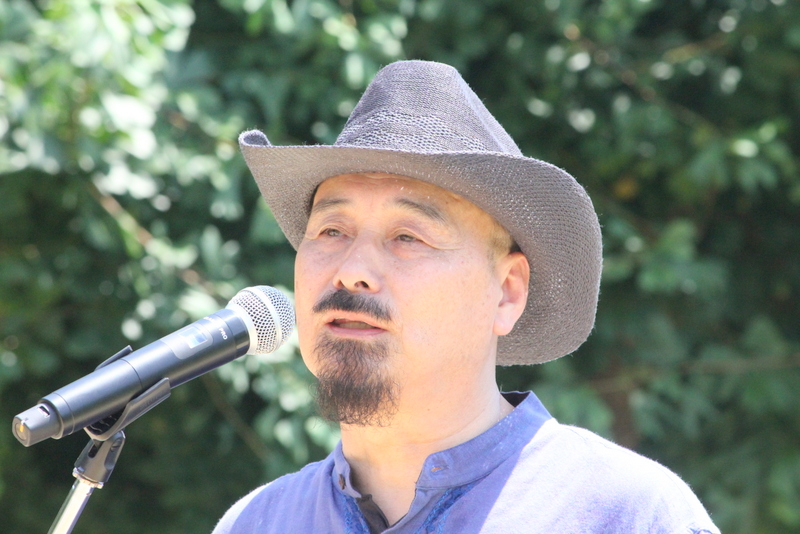 On July 26th, 2015, a word came to me while I was participating in the ceremony of the Mayan New Year “11 MEN”. That is the word of “TIME.” About 20,000 years ago, the Mayan calendar started. Tracing that history and studying Katakamuna here in Konohana Family, it is said that there was the Mu continent in the biggest sea of the Pacific Ocean before Katakamuna civilization emerged. When the Mu continent disappeared, the civilization of “TIME” moved east and became the Mayan civilization. And the civilization of the soul of language moved west to the country of Yamato (the ancient name of Japan) that existed at the edge of the Eurasia continent about 13,000 years ago. About two years ago, we at Konohana Family encountered Katakamuna as a teaching. Last year, we met the Venerable Grandmother Nah Kin of the Mayan Solar Tradition and started to have a ceremony of the Mayan New Year here in the country of Yamato.

Looking back on that history, we had the winter solstice of the galaxy (which occurs every 25,800 years) on December 21st, 2012. When our planet, Earth, has the winter solstice it means the peak of the darkness with the least amount of light. We, on Earth, perform life activities based on the life energy of the sun. Moreover, all the lives are given the character of the self and create the times together. The winter solstice of the galaxy is 25,800 years (which is one spiral of the sun) came on December 21st, 2012 which coincided with the end of the Mayan calendar. This indicates that the Mayan people who took over the civilization of “TIME” understood such a universal and solar structure even in the ancient times. 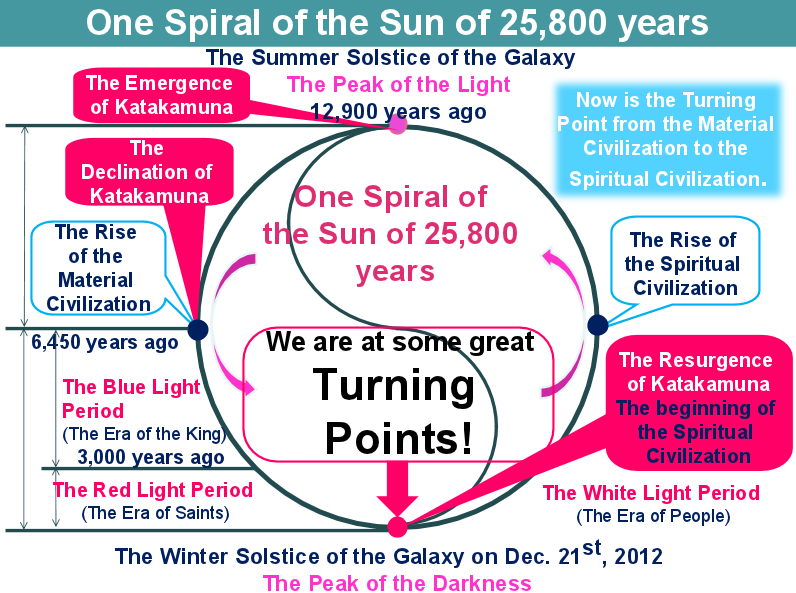 We, Konohana Family members, have been preparing the mind to welcome a new era until now. Each one of us has learned the history of our unique mind, analyzed our karma, and has prepared in order to welcome the new era with the new mind. That is Konohana Family’s 21-year-old history.

We are preforming the ceremony of the Mayan New Year here at the foot of Mt. Fuji as the starting point of circling the Earth on July 26th, 2015 with such various meetings. This ceremony begins in the country of Yamato, Japan and goes around the Earth over the next 24 hours.

Please imagine that the minds of the universally conscious people become like waves on Earth, spreading their wings and circling the Earth. In fact, the Earth is round and we live in one world, while the times have been woven forever without any interruption.

There are still many conflicts and various difficulties on Earth. However, these were not created by anyone or anything but humans. It is the result of the fact that humans have lived utilizing their egos only for themselves. And, this has not been for a long period. Slipping back in time, it might have begun after the Industrial Revolution of about 250 years ago. Going back further, it may have begun about 800 or 1600 years ago. Before that era, humans were supported by nature and flourished with other lives as one of the parts in the network of life.

Now that we have entered the new era, the egos have reached their peak in humans. However, is this a really bad thing?

It is nothing of the kind. Humans needed to fully express their ability in order to know their high potential. Then, when they actually did it, the problems spewed forth. This is the current time. The “TIME” has arrived when humans will control the egos by the soul of language. Maya (the civilization of “TIME”) and Yamato (the civilization of the soul of language) have met, so this ceremony of the Mayan New Year has been held in the country of Yamato, Japan.

Thinking in this manner, we do not live only within the frame that we can understand. The times move by the conversations of the stars and that is the universal structure. We always repeat changes, transformation and transfiguration, and evolve in the system.

Let’s manifest the harmonious world on Earth again, imagining such a thing. We humans have an excellent ability and huge influence on Earth. If humans become aware of the truth, I can imagine that they will grow up to become a soul that will greatly contribute to the Earth and even the universe in the next era. 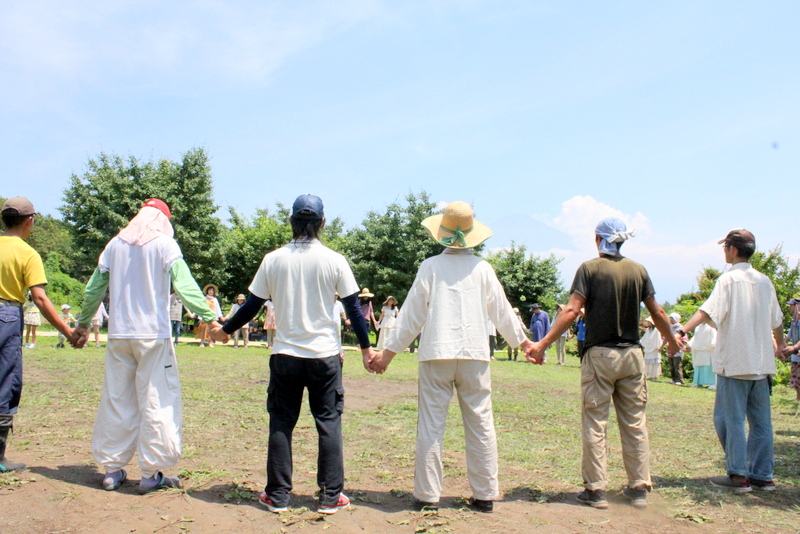 We have entered the 21st century and such an era has arrived at last. The door of a new era opened after the winter solstice of the galaxy on December 21st, 2012. We were given the preparation period of three years of 2013, 2014, and 2015. The year of 2015 is the last year. When this new year begins, people in the world will start to feel the flow of the new era and both humans and the Earth itself will welcome a new universal era!

If each one of us has the original path, Konohana Family is the one to express the universal will through this living as those who have realized it ahead of the world and have been awakened. I am sure that this will be reflected in the living of Konohana Family more and more in the future and will spread all over the world through the Earth network and the universe. I feel this gloriously sunny day is the proof of the divine will and would like to take the path consciously together with all of you.

Our path to establish the utopia on Earth began 21 years ago and now the times have caught up with us. People live with the 30-year cycle of Saturn and they know who they are for the first 30 years. Then, after knowing who they are, they express themselves in the life for the next 30 years. After that, they receive the result at the age of 60 and start the final preparation for the departure. We will weave a new era for sure during the next 10 years from the 21st to the 30th year of Konohana Family.

We live the universe, live the TIME and weave the era in such a sense. And there is our existence in the SPACE. Therefore, it is our purpose to live, observing our minds carefully and becoming aware of the universe, TIME and SPACE as the living being and the humans given a significant role.

Each one of us was given the original life by the universe. And we have entered the era when we should free ourselves from our egos and live for this world, receiving the divine will. That is a valuable and wonderful life. Let’s take the path with the responsibility for ourselves and high consciousness. And let’s realize utopia on Earth together. 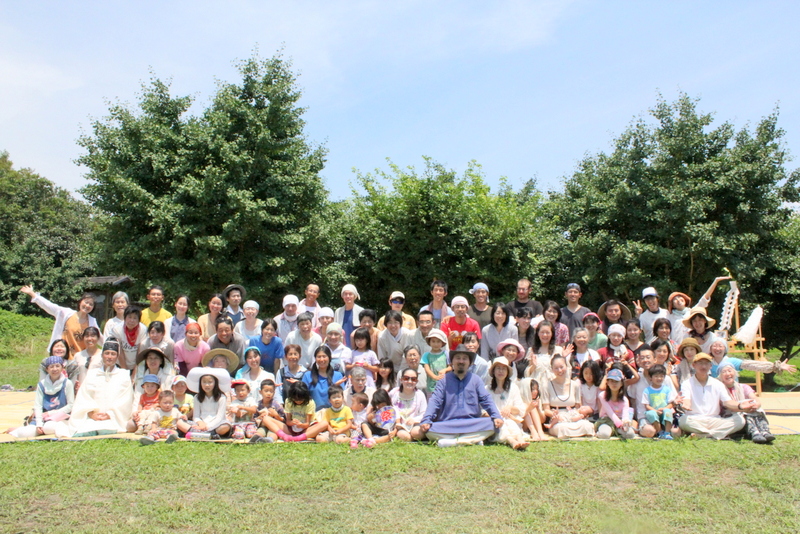